Ancient Foods in a Modern World

By Andi Sciacca, Director of the CIA's Center for Excellence in Teaching & Learning (CETL)

Imagine a kitchen without knives, a cooler, or a stove. Consider a time and place where the only tools available to you were what you could make with your own hands, fashioned from bits of stone, wood, animal bone, antler, pine pitch, and moss. Envision a day spent gathering seeds and greens, spear throwing for practice and sport, and creating pigments for paintings that depict the story of the hunt. Or, picture yourself scraping honey from the comb, chewing on the soft wax, and joining a group of your friends to share fermented cider while discussing ideas of importance to your community. Now, imagine this happening at the CIA’s Hyde Park campus overlooking the Hudson River, not thousands of years ago, but in 2013!

On Saturday, September 21, a group of CIA faculty, students, and staff were treated to a full day of planned activities and tastings focused on ancient food preparation methods. The theme, “Feasting & Foraging: Ancient Methods for Modern Times,” was the culmination of several months of careful planning under the direction of Dr.Maureen Costura, CIA associate professor of liberal arts. 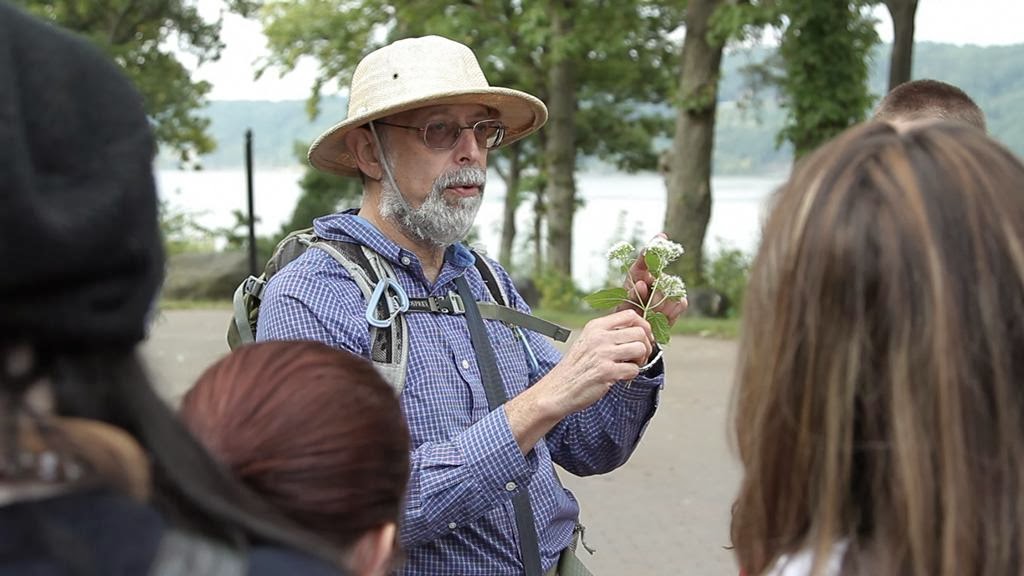 The day began with a foraging tour led by Naturalist “Wildman” Steve Brill, a local foraging expert. He took a group of 15 students into the woods adjacent to campus on a quest to gather seeds, nuts, berries, and various greens. From her forage walk across the campus grounds, Professor of Culinary Arts Katherine Polenz ’73 brought back handfuls of fresh, fragrant, and sweet red and golden raspberries to share. Most students were surprised to learn that they were growing right under the windows of Rosenthal Hall.

While those participants foraged, others helped Assistant Professor of Culinary Arts DarrylMosher as he started and stoked a wood fire in a stone-lined pit at the base of the hill next to the Student Recreation Center. The pit was only a few feet deep, but it took a group of students two hours to prepare the area the previous afternoon—seems everyone wanted a turn using the pickax or shovel to see what the experience was like. 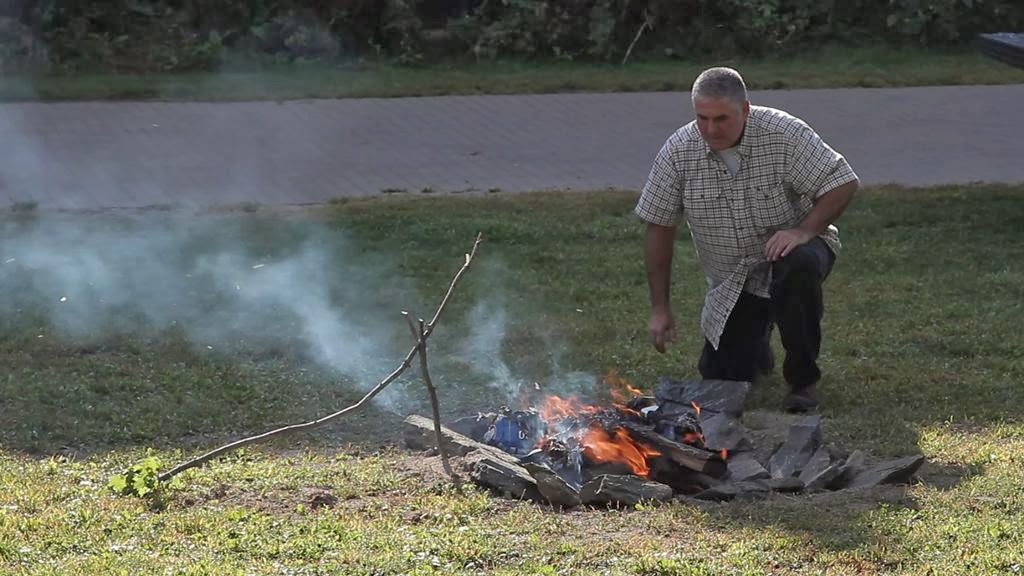 As the fire grew under Darryl’s careful watch, other students and staff, including Dean of Culinary Arts Brendan Walsh ’80, gathered around a table and donned safety goggles and leather work gloves (not historically accurate, but necessary) for a flint-knapping (shaping) class. Research archeologist and stone-tools expert Emmett O’Keeffe, an accomplished stone-worker and an Ad Astra Research Scholar with the University College, Dublin, demonstrated the skill. He brought several primitive knives to use as models—including razor-sharp blades of flint and obsidian attached to deer and elk antler handles with pine-pitch and sinew. 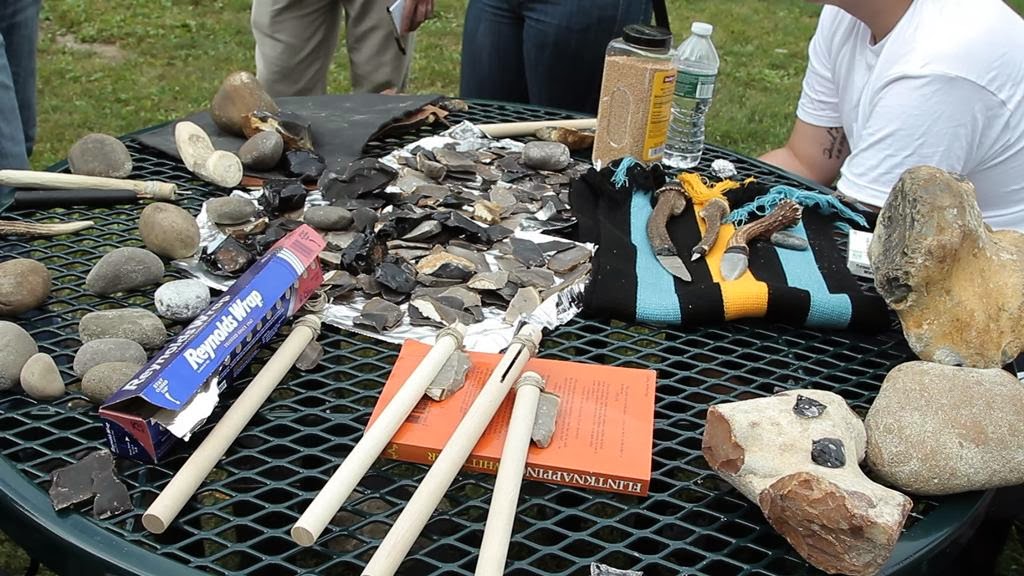 After the hands-on toolmaking, the students took their blades and gathered around a makeshift station to butcher salmon, lamb, and pork, and prepare various root vegetables for roasting. They were surprised by how quickly they could adjust their cutting styles to work efficiently with the meat and by the sharpness of the primitive tools. 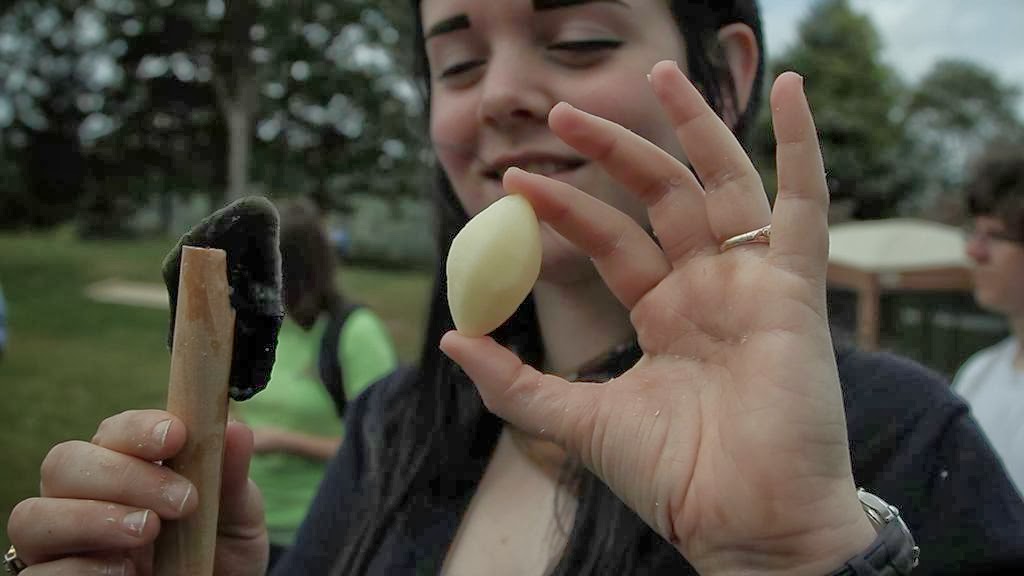 The feast was cooked over the open fire. To relax while waiting, some tried their hand at using an atl-atl to throw a spear while others created paint by mixing vegetable pigments and saliva so they could paint stories of the day on strips of burlap. When it was time to eat, everyone gathered around the fire with flat stone plates and stone-tools to assist with serving. The lamb was the unanimous favorite, with the pork ribs and suckling pig a very close second. Dr. Costura brought ground mustard seed and varieties of salt that were probably used in early preparation and preservation of meats. Most agreed that the salmon and mustard were particularly piquant when combined. 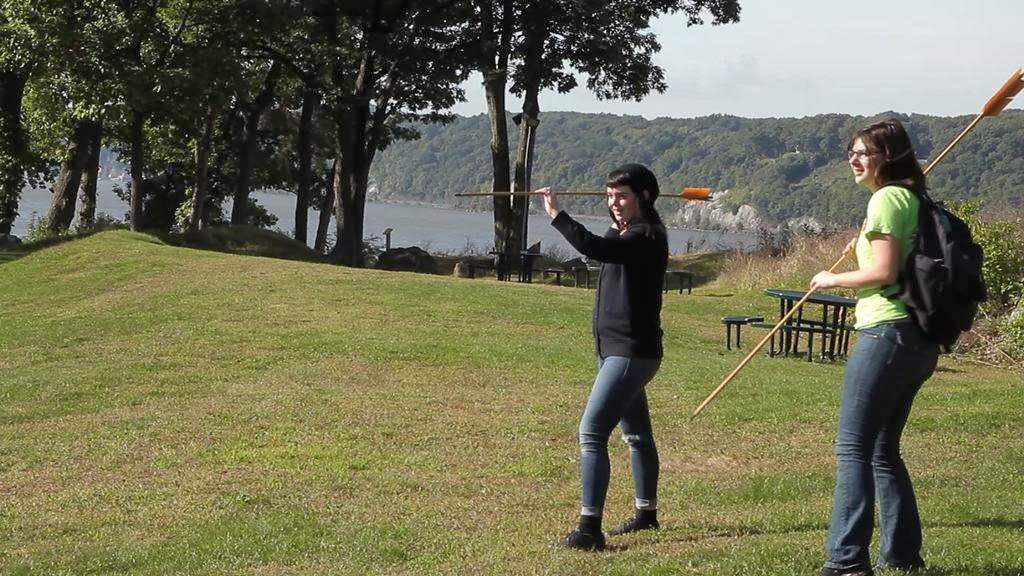 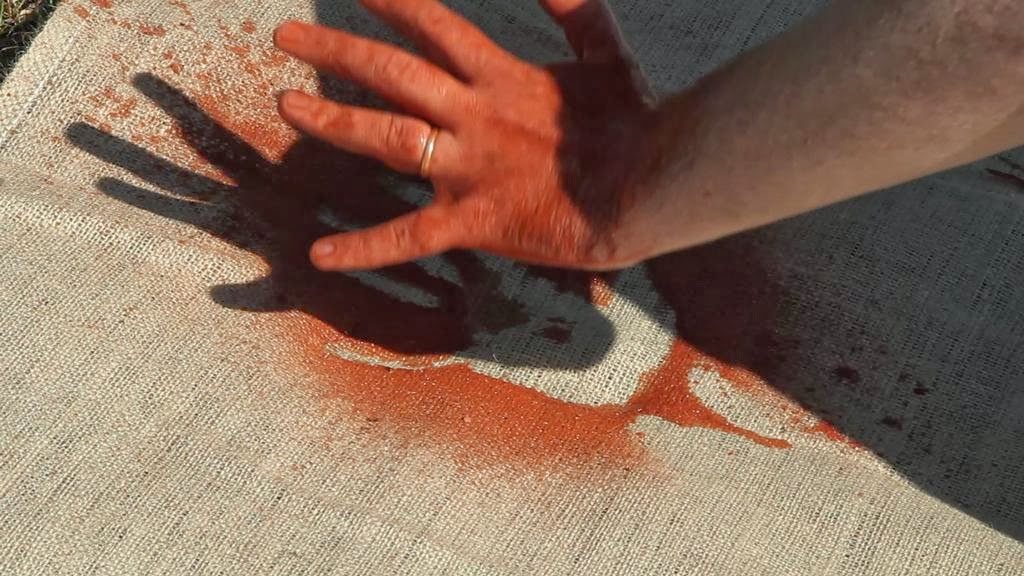 Once the food was eaten and only discarded rib bones and salmon skin remained, participants watch local artisan Anita Fina Kiewra demonstrate honey extraction, using the wooden frames from several of her hives. Student volunteers painstakingly shaved the raw honeycomb prior to pressing it. Anita passed around an array of honeys gathered from specific locations at various times of year to demonstrate the differences between them. 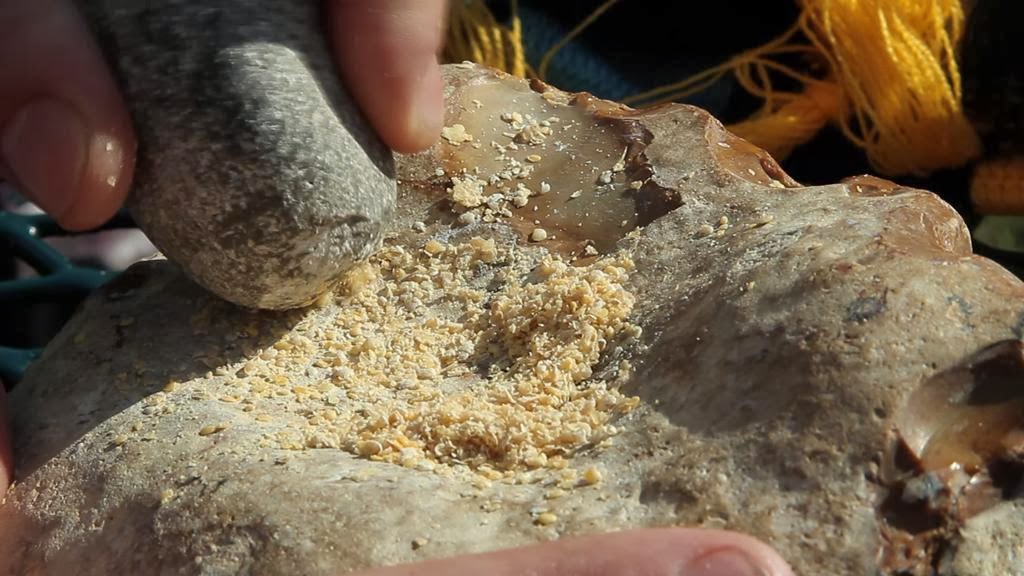 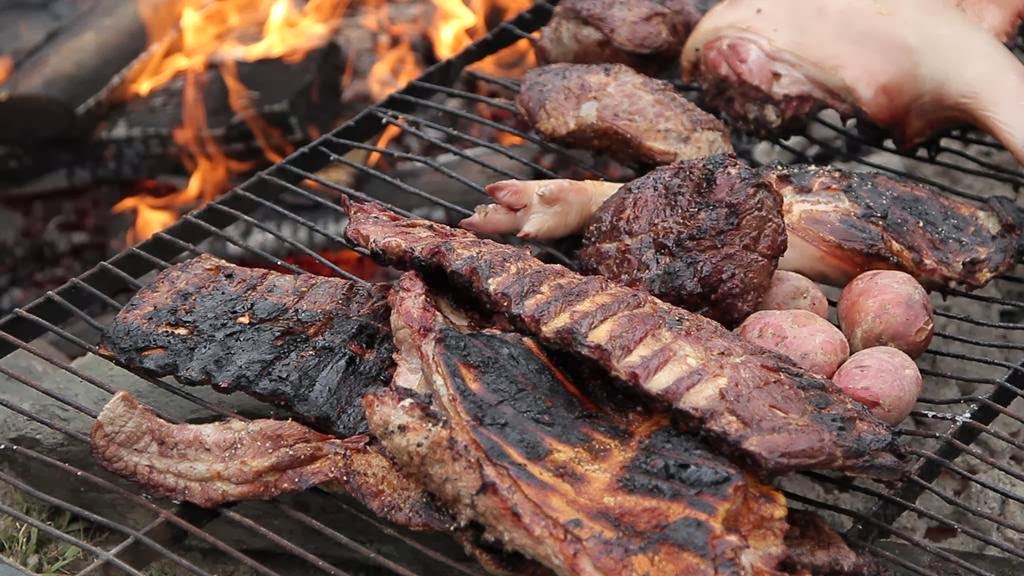 And finally, students sat under the shade of a tree for a lecture and discussion on the nature of academic symposia as drinking parties! The lecture, given by Marist College philosophy professor Dr. Gregory B. Sadler, was entitled “Symposia Then and Now, or, Why Did We Quit Drinking?” Dr. Sadler specializes in ancient and medieval philosophy. He led a spirited discussion following his lecture that continued on for an additional hour. To enhance the event, a maple-apple hard cider created on campus by Associate Professor of Hospitality and Service Management Doug Miller ’89 was shared by all of drinking age as the conversation ranged over the origins of epicurean delights. As the day came to a close, many lingered to share stories about their favorite parts of the day. All agreed that the weather was ideal, the food was excellent, the opportunity to learn and try new things was abundant, and the company was—as always at the CIA— convivial, diverse, and engaging. 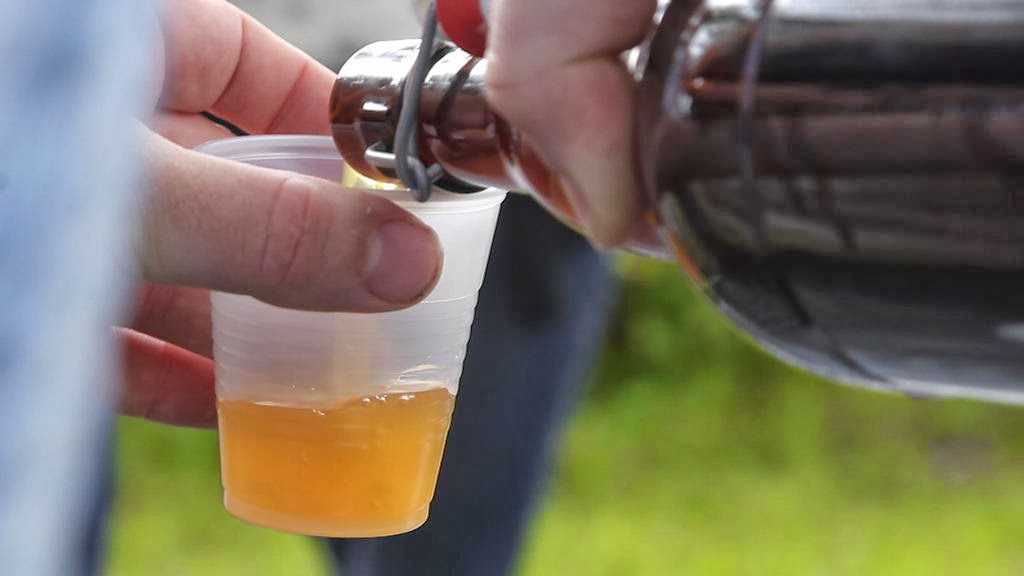 Dr. Costura organized this event as “a way for participants to connect to the foodways of people in other cultures, and gain respect and understanding for the skill and effort it takes to prepare food in non-technological societies.” Her work was funded by the CIA’s Center for Excellence in Teaching & Learning (CETL) and The Julia Child Foundation for Gastronomy and Culinary Arts.

She created this experiential event as a pilot-test for a new BPS elective entitled “Ancient Foods in a Modern World: Latin American Crops in a Global Arena.” Scheduled to begin on the Hyde Park campus in January 2014, this elective will also be a foundational course in the new Latin American Cuisine concentration at the CIA San Antonio beginning May 2014. Dr. Costura encourages any alumni interested in learning more about the course or about her research to contact her at m_costur@culinary.edu.

This article will appear in the February 2014 edition of the CIA’s alumni magazine, mise en place. Read mise en place online and see other CIA publications at our issuu site.
Posted by CIA Admin at 10:52 AM